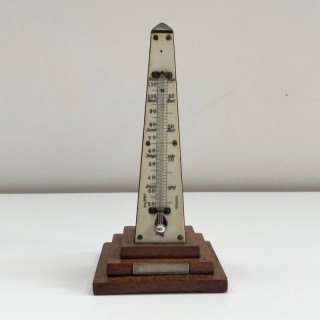 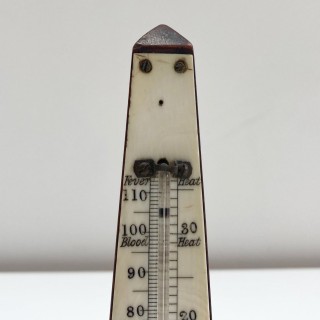 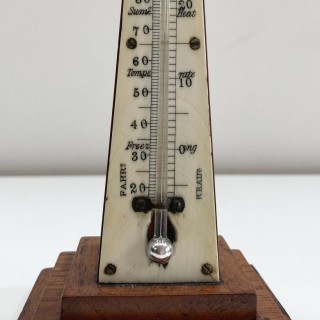 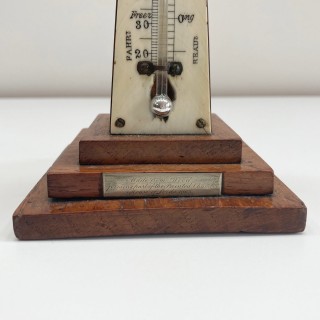 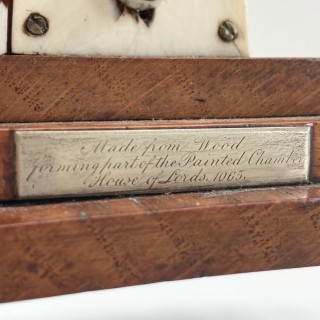 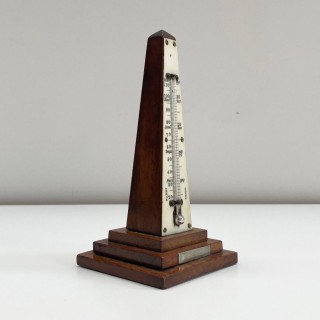 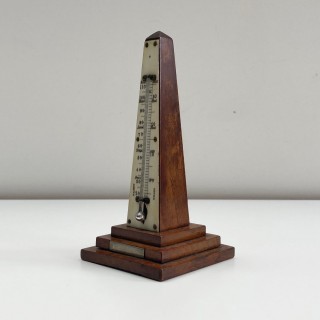 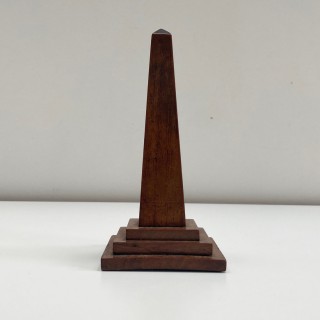 For sale, a William IV period desk thermometer constructed using reclaimed timber from the painted chamber in The Palace of Westminster destroyed by fire in 1834.

Simply constructed using three graduated square sections of wood to form the base and mounted with an obelisk shaped column to the centre. A thermometer with Fahrenheit and Reamur scale is affixed to the front side with a small silvered plaque to the front of the base engraved with:

“Made from wood forming part of The Painted Chamber, House of Lords 1065.”

The Palace of Westminster was a medieval royal palace and subsequently used to house The British Parliament until it was completely destroyed by fire in 1834. The building was partly used for the storage of tally sticks, a method in which to record agreements and loans between two individuals. The two halves of the tally stick would be marked with corresponding markings and both Parties would receive a piece each. Values could be recorded on these sticks and ensure that no fraudulent activity could take place. The marks could not be increased or tampered with because they would not then correspond when reunited.

Their use by The Government was phased out by 1826 but it left over six centuries of these tally sticks in storage. By 1834, the order was given to burn these now defunct items which was carried out using the furnaces under The House of Lords. The ensuing activity unfortunately caused a chimney fire that set almost the entire Palace alight. Not only did it destroy the buildings but it also destroyed Centuries worth of House of Commons papers and even the original British Standard measurements which had been created in 1496.

The Painted Chamber itself formed part of the Medieval Palace and was built by Henry III in the Thirteenth Century. Originally called The King’s Chamber for obvious reason, it was given its later name due to the painted murals that ran along its sides and which took sixty years to complete starting in 1226. In more recent times before its demise, the chamber was used to host meetings of The House of Lords but it was also the place where evidence was presented for Charles I’s trial and also to sign his death warrant. Ironically, his son Charles II was brought there, the night before his burial in Westminster Abbey.

In the aftermath of this devastating fire, those involved in the salvage operation made good use of the remaining timber and a number of trinkets and souvenirs were produced for public consumption. The practice being similar to that more commonly seen with ship’s timber where articles were produced emblazoned with dedications to such ships as HMS Victory.

The date on this particular example seems a little suspect given that the Painted Chamber was initially built in the thirteenth century some two hundred years beyond 1065 but it is likely that the enterprising fellows behind these keepsakes considered the reference to the original Anglo-Saxon Westminster Abbey as more enticing to the purchaser. The site of the Painted Chamber is considered to have been the site of Edward The Confessor’s death and the Abbey was first consecrated in December of 1065, a year before William The Conquerer’s invasion. The timber however is much more likely to have been salvaged from the later Thirteenth Century building.

A super little item with a fantastic piece of associated history.