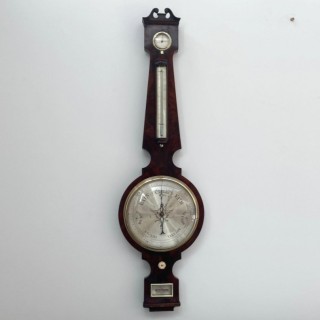 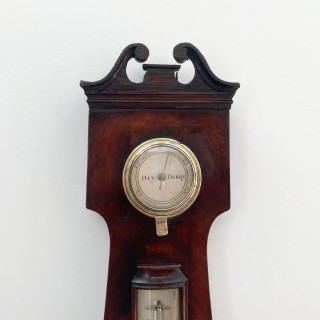 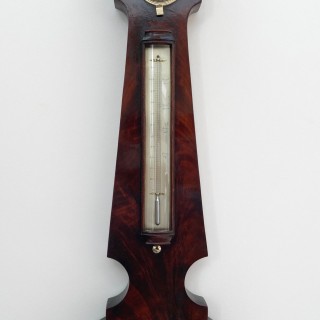 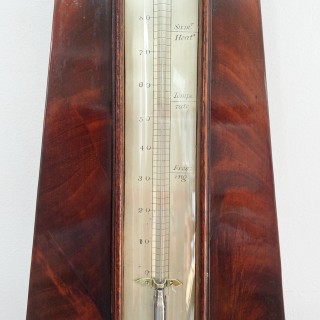 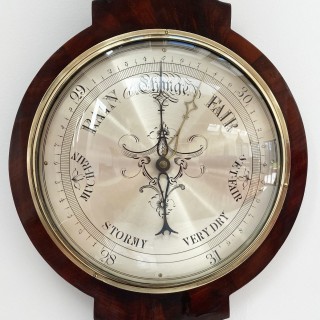 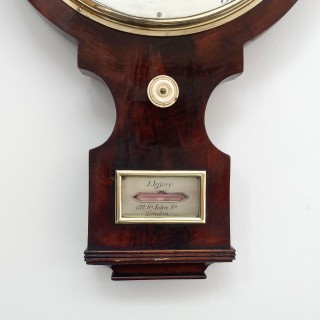 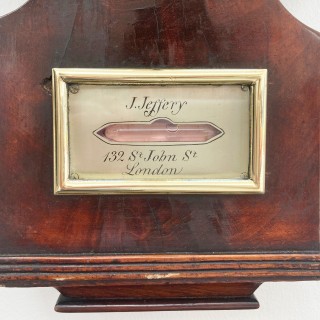 The barometer is comprised of a ten inch silvered dial with a fine scale measuring 28 to 31 inches of barometric pressure around the circumference. The inner circumference contains standard weather indications with “much rain & set fair” references being engraved around a flower motif which gives it the dial an interesting and subtly different aesthetic from the norm.

The central engraving continues the floral design theme in a style reminiscent of the rococo. It is complete with a lavish blue steel pointer and brass set hand which is hand operated below. The brass spun bezel completes the dial and is mounted with a convex glass.

The barometer is topped with a broken swan neck scroll with wheat beard hygrometer below and lovely silvered scale Fahrenheit thermometer. Both the hygrometer and the thermometer are retained within the carcass by brass clips which allow both instruments to be separated from th barometer if required for measurements elsewhere in the house.

The carcass is typical in form for the William IV period where the style became slightly more angular in form, instead of the sweeping hips or curves of earlier designs.

The base of the barometer is completed with a bubble level encased behind a silvered brass plate with the maker’s name beautifully engraved to, “J Jeffery, 132 St John St, London”. Botht he palte and the level are set behind glass with a brass surround.

Little is known of James Jeffery although it seems that he and his brother William were both trading from St John St in the early stages of their careers. His brother William is recorded as having been apprenticed to the renowned instrument maker William Elliott whose sons went on to form the equally renowned firm of Elliott Brothers of The Strand London. Although James’s apprenticeship is not recorded it may be reasonable to consider that he may also have been apprenticed to William given the family’s contacts. William and his son after him are both later recorded as trading from 26 Wilderness Row which was William Elliott’s original trading address so the ties between these families was evidently strong. Sadly, there is currently little more that I can find in the records but the connections with the Elliotts is certainly worthy of further research when time allows.