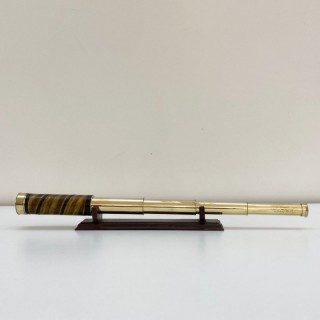 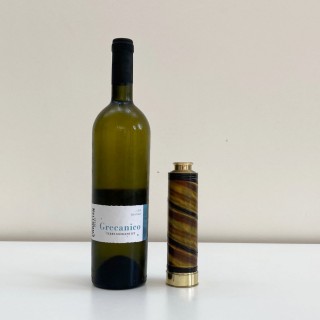 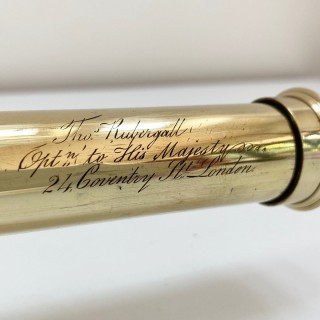 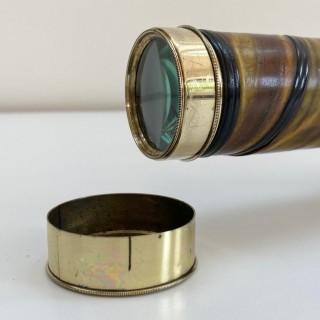 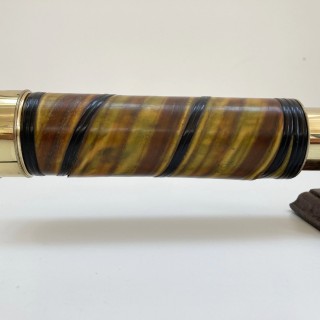 This super little brass four draw telescope with one and a half inch diameter objective lens has a rare red, yellow and black striped baleen covered barrel and original brass end cap. Fully drawn the telescope measures 55cms and closed just 16cms. The eyetube retains it original dust-slide and is engraved for “Thomas Rubergall, Optician to His Majesty, 24 Coventry Street, London”.

The maker Thomas Rubergall was active from 1802 until 1854 in London and traded from three different addresses throughout those 52 years. Princes St, Soho from 1802 to 1805, 27 Coventry Street from 1805 to 1823 and then thereafter to number 24 Coventry Street. Rubergall seems to have been from Huguenot French descent and may be related to earlier well known Chelsea market gardeners of the eighteenth century with the same name. He was renowned enough to have been appointed optician to George III and mathematical instrument maker and optician to the Duke of Clarence (later William IV) and to Queen Victoria.

The site of the Rubergall’s shop was situated between Piccadilly and Leicester Square.

A superbly executed and rare design from one of the most prominent scientific instrument retailers of the first half of the nineteenth century. The dating of this instrument can be reduced to a fourteen year period between 1823 & 1837 which relates to the dates that Rubergall began trading from the 24 Coventry Street address and the death of William IV (note the king inscription). Given the trading address dates, the reference to His Majesty could very well mean George IV but I suspect slightly later due to the use of baleen and also the fact that Rubergall from the various inscriptions that I have come across, seems to have maintained a very close relationship with William IV as a patron.