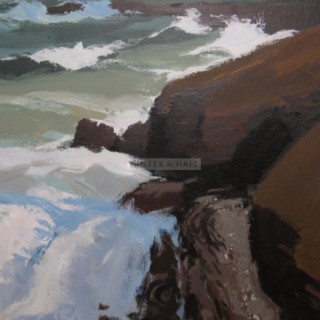 Donald McIntyre was born in Leeds in 1923 of Scottish parents and spent his formative years at Garelochhead in the west of Scotland. A group of artists influenced by the teaching of James Wright RSW lived near his home and McIntyre joined them. Under Wright’s guidance McIntyre developed a palette firmly based in the Scottish Colourist tradition.

Whilst Donald McIntyre always wanted to be a painter he first trained as a dentist; fortunately, however, the dental hospital was opposite Glasgow School of Art and he was able to attend evening classes there. He practised as a dentist, served in the army and taught in schools until the age of forty. Then, encouraged by the Howard Roberts Gallery in Cardiff, he left dentistry to become a full time painter.

He lived in North Wales for some 45 years, spending most summers painting on Iona. Smaller works he often completed in situ but his sketches, which captured the rapidly changing light and mood, were taken back to his studio for reference. Donald McIntyre was inspired by the landscapes of his childhood and retained a lifelong love of the coastline of the British Isles. Painting mainly in acrylic he captured with vibrant colours the light and life of his subject matter with masterly small and broad brush strokes.