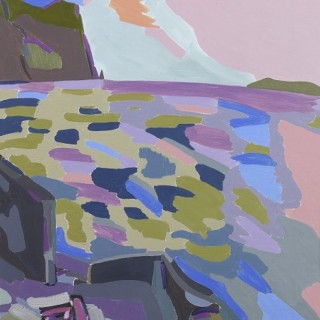 Born in Berlin, his father, an industrialist, moved the family to Czechoslovakia in 1933 soon after Hitler’s accession to power. In 1939, after the Kristallnacht pogrom of early November 1938 and the consequent setting up of the Kindertransport, Harry and his sister caught the final train leaving Czechoslovakia for England. After war service in Italy he lived in South Wales where he entered a life class run by Ceri Richards, who suggested he went to study at Chelsea College of Art. At this time he took private lessons from the émigré German artist Martin Bloch, whom he greatly admired. A long teaching career culminated in his running the department at Lanchester Polytechnic, (now Coventry University). The Pump Room at Leamington Spa hosted a major retrospective of his work in 2003–2004.

Painting is in good original condition.