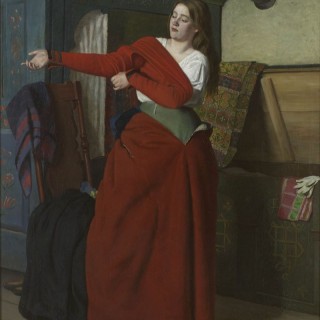 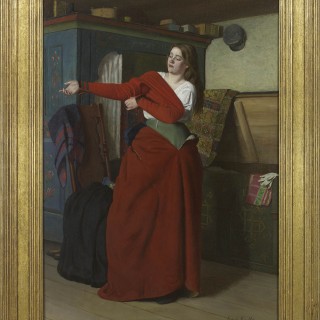 Original Oil on canvas by Swedish artist Jakob Kulle Ohlsson.
At one level of appreciation this is a beautifully painted figurative work by a leading nineteenth century Swedish artist. At another, it is a meticulously researched historical record of the country interiors in traditional Swedish dwellings of the period. Kulle became fascinated with Swedish folk culture, particularly the patterns and designs of woven fabrics in country homes around Skåne. In fact he documented over sixteen hundred such designs, reproducing two hundred in his seminal text on the subject. Just in case you hadn’t noticed the blankets.
Available at Panter and Hall.

Born in 1838 in Lund, he was apprenticed to a goldsmith in Malmo from 1855 efore moving to Stockholm in 1860, where he worked as a goldsmith until 1867. From 1864 to 1872 he studied at the Academy in Stockholm and it was there that he developed his interest in folk culture, eventually leading to his becoming a pioneer in textile handicraft. He travelled around Skåne and studied the old Skåne decorative fabrics. He collected thousands of designs that he found touring cottages in the in the cottages in the Skåne countryside. In the 1880s he taught pattern drawing at the Technical School in Stockholm. Together with her sister Thora Hill, Ohlsson formed weaving schools in Lund and Stockholm and authored the seminal text on the subject, ‘Swedish patterns for art and embroidery’. Kulle’s work is represented by the National Museum in Stockholm, Linskäktning and Kistehammare Museums, both in Skåne, Hälsingborgs Museum, Kristianstad Museum, the Cultural History Museum in Lund and Malmö Museum.