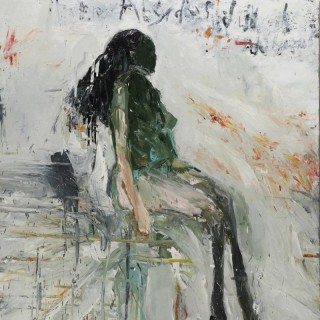 An Edinburgh based painter, Audrey studied in the early 2000s at Leith School of Art under Paul Martin and Philip Archer. Audrey works in oils on canvas in an abstract figurative style. Recently the Glasgow Herald cited her as one of Scotland’s finest painters alongside Kate Downie, Barbara Rae and Joyce Cairns.

Audrey has exhibited at the Royal Scottish Academy, the Royal Academy in London and the Royal Glasgow Institute. In 2017 she was invited as a Guest Lecturer for the MFA in Art and Humanities at Duncan of Jordanstone College of Art in Dundee and has recently been asked back to give another lecture.

In 2018, Audrey was granted the W Gordon Smith Award for her work in the VAS & SSA Together Annual Exhibition. Her other awards include the 2013 Anne Redpath Award, Visual Arts Scotland, the 2011 David Gilchrist Memorial Award at the Royal Glasgow Institute of the Fine Arts and the 2011 Maverick Award at The Tom McGrath Trust.

In 2019, Audrey exhibited with The National Galleries of Scotland at the Scottish National Portrait Gallery with a show called ‘The Long Look: the artist and sitter, Audrey Grant and Norman McBeath’.