Robert is a self taught conservator who has personally conserved over sixty thousand oil paintings making the Mitchell Conservation Studio one the most experienced in the world. His wife Vicki is his studio assistant. Robert and Vicki’s son Darrell joined the studio in 1985.

From 1968 to 1971 Robert researched, developed and built his own Vacuum Conservation Hot Tables. By 1980 Roberts’s inventive nature led him to reject the old fashioned hot iron glue and bees wax techniques (hot irons damage soft modern paint) and concentrate on low pressure low temperature bonding. Around 1990 Robert started to develop a range of Global warming friendly conservation supports, currently using eight different materials to suit the problem and the age of the paintings arriving at the Mitchell Painting Conservation Hospital.

In 1977 Robert started the restoration and Gilding of old frames. In 1992 Classic Fine Art Frames was opened by Robert and frame maker Wayne Cooper to add the manufacturing of bespoke frames for Dealers, Restorers, Galleries and Artists. Since 1971 Robert has helped a number of Traditional artists to develop their painting techniques and sold old paintings to the fine art trade gaining knowledge as a painting dealer.

In 2005 Robert and Darrell opened the Mitchell Studio Gallery to advise and help collectors to build and maintain their fine art collections, restore or make Gallery frames to create the right decorative look. All restoration work undertaken by the Mitchell Studio Gallery is carried out in the Mitchell Conservation Studio run by Darrell and the Classic Frame Studio run by Wayne known as the Mitchell Triangle, all three Studios within 3 to 5 minutes traveling distance. Works on paper with acid damage are restored through the Gallery and old mounts replaced with acid free mounts.

The Gallery has up to eight hundred works of art, the largest stock of original oil paintings and works on paper for sale in the area with 19th and 20th, Century art including works by artists currently painting. The Gallery stock includes art works direct from the studio of British post impressionist painter Sir Claude Francis Barry 1883 -1970. Gallery visitors and collectors are Local, National and World wide, join them and tap in to a vast pool of expertise and advice. Mitchell Studio Gallery
"cutty sark" in the pool of london after pasing through tower bridge by henry scott,
Price on request 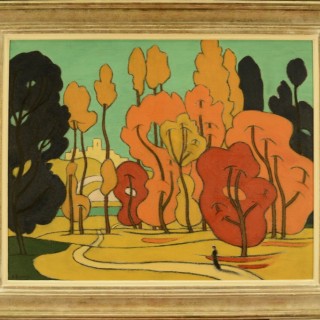