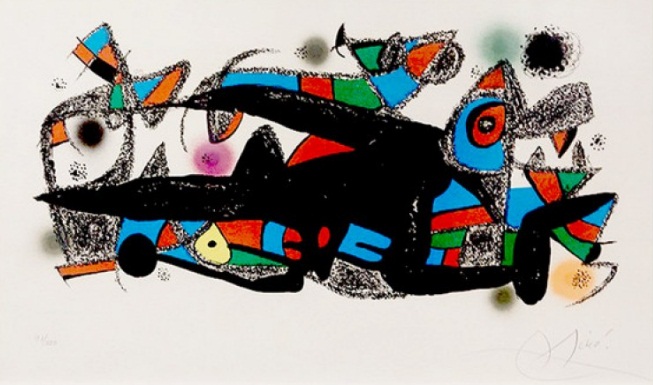 All the major 20th century artists were committed printmakers, creating stand-alone artworks that were not copies of paintings.

As in any area of their production, they worked personally on the design, so when you buy an original etching by Picasso, for example, you know that he himself worked on the metal plate to create the image that was then transferred to the paper, and decided the number of the limited edition. When the edition was completed the plate was destroyed.

As an investment, a hand signed and numbered work is better than a stamped and signed one. A smaller edition size usually means the print will cost more. In addition to the numbered edition, there are likely to be a few artist’s proofs and printer’s proofs: sometimes these are worth more than the numbered edition, if they have unique features which were revised in the final edition. All numbers of the edition hold the same value.

A key resource in identifying an original print is the catalogue raisonné: a complete catalogue of the artist’s work. Most of the major artists of the 20th century have a catalogue raisonné for each aspect of their artistic production, which will give the full details of each work: if the print matches the listing in every detail, there is a very good chance it is original. Do check the signature to make sure that it matches the artist’s signature from that period: handwriting does vary over time.

Condition is a very important factor in the evaluation of a work of paper. The paper should be free of rips and marks; also look for nice fresh colours. Display your prints out of direct sunshine, and equally away from any source of dampness. Make sure the works are framed using acid free mounts and with a good UV filter conservation glass, and ask your framer to add felt pads at the bottom corners of the frame: this aids air circulation.

As original prints are often referred to by the technique used to produce them, read on if you would like to understand the differences between printmaking methods.

Relief Printing involves drawing on a suitable surface then cutting away around it, leaving the drawn areas in ‘relief’. Only the raised drawing takes the ink: relief prints are therefore characterized by bold dark-light contrasts. The primary relief techniques include Woodcutting, which originated in ninth-century China and reached the height of its Western popularity in the 15th and 16th centuries, before being revived in the late 19th and early 20th centuries: most notably by the German Expressionists, who enjoyed its simplicity and directness. Wood Engraving is an extremely fine form of woodcutting, using blocks made from the end-grain of the wood for greater precision and detailing. Linocutting is essentially the same process as woodcutting: however linoleum is softer and easier to use. Picasso began using the linoleum off his floor as early as 1939, and from the mid-50s linocuts became an important part of his print production, imitating the bold designs and bright colours of the posters advertising local bullfights near his home in the South of France.

In Intaglio Printing, the image is cut into a metal plate using either a sharp tool (engraving) or acid (etching) before inking and wiping. In the printing press the dampened paper is pushed into the grooves, picking up the ink. The plate is usually smaller than the paper, so that the impression of the plate – the platemark – remains on the paper: an easy way to tell an intaglio print. The primary intaglio techniques include Engraving, where the plate is cut into directly using a sharp-pointed tool called a burin: the resulting shavings, or ‘burr’, are usually cleaned off before printing, giving the engraved line a sharp, clean appearance. Shadows are created through cross-hatching. Drypoint is a similar process, using a more delicate tool, and the burr is not scraped away, resulting in softer-looking lines, although the press’s pressure soon flattens the burr so only a few prints can be pulled before the lines start to blur too much.

Mezzotint is essentially engraving in reverse: a spiked roller (‘rocker’) creates a textured surface on the plate, with the artist flattening (burnishing) areas so that they do not hold ink. This allows a great variety of tones and is ideal for atmospheric landscapes. In Etching the metal plate is covered with a waxy coating (‘ground’) and drawn upon with a burin, exposing the metal beneath, before immersion in acid “bites” into the exposed lines, preserving the drawing. The ground is removed, and the plate inked, wiped clean and printed in the same way as an engraving. It is much easier to draw quickly onto the ground than directly onto the plate and this is why etching became the preferred technique for artists such as Picasso and Matisse who wanted to match the fluidity of drawing with the aesthetic possibilities of printing. In the variant Aquatint the plate is covered with a semi-porous ground which allows the acid to bite through evenly, creating areas of tone on top of the incised lines: therefore aquatints often look like ink-brushed drawings or watercolours.

Lithography was invented in 1798 for making posters: the 1890s works of Bonnard and Toulouse-Lautrec are perhaps the best-known examples. The artist draws on the stone or plate using a greasy medium such as a wax crayon and dampens the surface with water, which sticks only to the sections of the plate that have not been drawn on. The applied ink then sticks only to the greasy sections, allowing the original crayon drawing to be printed.

Screenprinting was made famous by the Pop artists of the 1960s, who commandeered this commercial process to make art of consumer icons. A fabric mesh (screen) is stretched over a frame placed over paper, then blocked out with a stencil, usually in a number of layers to allow various elements to be printed. One of Warhol’s great innovations was to cover the screen with a photosensitive material and project a photograph on it, turning the screen into the equivalent of a film ‘negative’ and thus allowing him to endlessly print the images of his favourite stars.

In a monotype, a metal plate is drawn on in ink and pressed against a piece of paper. Usually the ink will last for one strong and one weak impression – creating an ‘original drawing’ and a printed edition of one (hence the name).