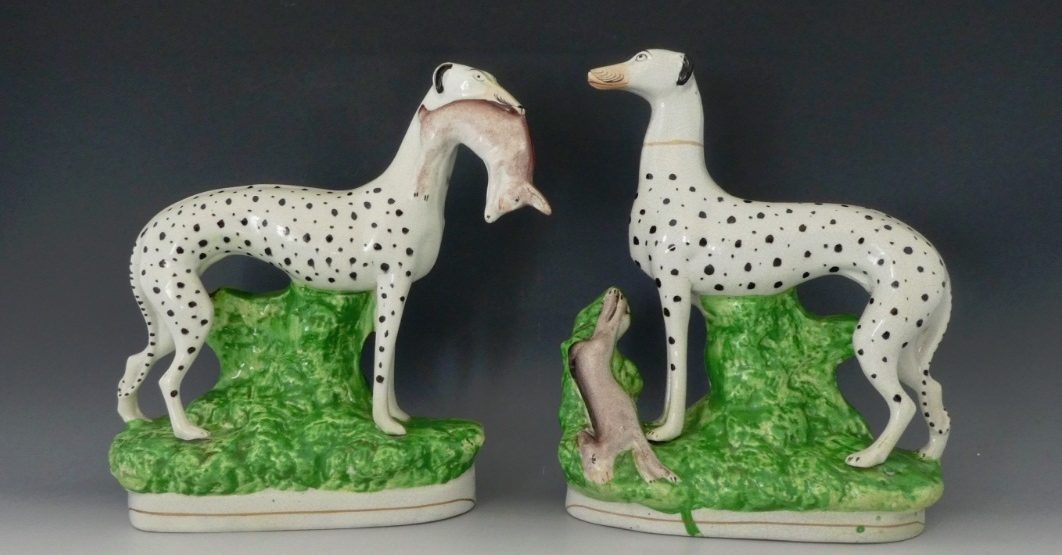 Staffordshire figures resonate with social history and have always held appeal. They are folk art: of the people for the people.

Within the genre are pieces to enhance almost any theme in a decorative scheme: plainly decorated pieces fit perfectly with the clean, minimalist look, whilst a single large piece will highlight a corner, perhaps in the form of a lamp on a side table. All manner of pieces are available to fit with country themes – for example birds, farm animals or horse riders – whilst a clutch of figures all sporting significant pink, yellow or green may be chosen to co-ordinate with complimentary colours in the surrounding space. Collectors, too, are spoiled for choice of direction: some will focus on one particular period, others collect only figures of a particular type, for example royalty or theatrical figures, and others again may limit themselves to oversize or miniature figures, or by form, such as watch holders or cottages.

Whilst these earthenware figures were made mainly in England, and predominantly in Staffordshire, other counties and Scotland also produced examples, and the broadest use of the term would include all earthenware figures made circa 1740 to 1960. Subject matter evolved in response to popular taste, but two subjects remained popular throughout the entire period: lions and dogs! A multitude of unknown small manufacturers produced most of the Staffordshire figures we see today, and with the exception of Walton, marked pieces are rare. Visualize the development, over many generations, of constructions, moulds, methods, modelling style, choice of subject matter, formulae for glazes, enamels and gilding, varying ovens and kilns, and recall the wide diversity of potters and artisans and factories, each adapting to change at different speeds: at any one time there would have been significant variation in the end product of all these different enterprises. This helps to explain why an unusual looking figure is not necessarily ‘wrong’.

The safest way of being sure you are buying the real thing is to purchase from a reputable dealer, and make a habit of asking the right questions: What age is it? Where was it made? How do you know? “Reproduction” refers to a reproduction or copy of an original, often using moulds taken from original pieces. The reproductions one has to watch out for are those being sold purporting to be older than they actually are, either through ignorance or deliberate intent. To eliminate 98% of 20th century reproductions when looking at pre-Victorian and Victorian figures, first concentrate on the base glaze, foot-rim, and the gilt. The base glaze should be distinctly tinged with colour, compared to typical 20th century repro bases where the glaze is thin and colourless. On the foot rim, look for base glaze coming up and onto the foot rim in one or more places: in typical 20th century repro foot rims glaze never comes up and onto the foot rim, and often has a brushed look or chalky feel. Gilt with crazing showing through is always 20th century, and beware ‘brassy’ or ‘coppery’ gilt, as well as an absence of gilt where it would be expected. Old dull mellow gilt was used circa 1830 to 1875 and is hard to replicate; mirror-bright gilt replaced dull gilt from circa 1875. Other indicators include:

– No flaking of the weaker enamels, no rubbing of the gilt, no wear and tear.

– ‘Wrong’ colours: some 19th century colours could not be mimicked with 20th century enamels.

– ‘Wrong’ faces: a figure with an oriental look was probably not made in Britain.

– Slip casting indicative of 20th century manufacture, evidenced by large vent holes on closed base pieces and by smooth interiors on open base pieces.

– Rough texture to the glaze or enamels.

To spot restoration, look for slight changes in colour, or a disappearance of normal crazing. Feel for a change in texture or in hardness: tapping lightly with a sharp steel implement works well, as the softer acrylic of the repair can be distinguished by feel from un-restored enamel or white glaze.

Established in Leeds, Yorkshire, in 1957 by our chairman D Kevin Smith, Windsor House Antiques has grown from a small one-man operation into a globally recognised company. In 1999 it was decided to relocate the…

Madelena was established in 1997 selling antiques online. Our small team is based in Essex, UK. We are dedicated to providing you with a safe, simple, trusted and enjoyable antiques shopping experience. We source great…
STA
Lapada Dealer

Sally established the business 40 years ago but, as a third generation antiques dealer, has been dealing for over 50 years. After initially working in the family antiques shop in Gloucestershire, she opened her first…
Lapada Dealer