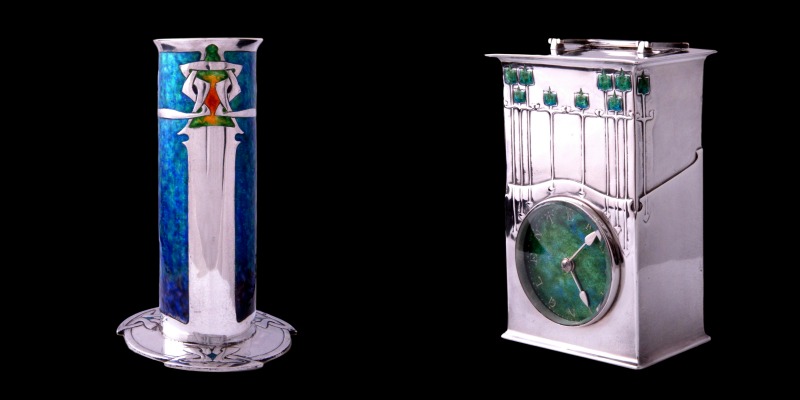 Archibald Knox was the brilliant Manx designer for Liberty in the period 1898-1906. During this period he designed (not made) everything from wallpaper to jewellery, though his most famous work was for Liberty’s Cymric silver range and Tudric pewter range.

Archibald Knox (1864-1933) was a talented and prolific designer whose work spans modernism, Art Nouveau, the Arts & Crafts movement, and Celtic revival. He designed for Liberty, the Regent Street store still open today, for just eight years of his life but throughout his career as an art teacher he also painted water colours, principally landscapes of his beloved Isle of Man.

Archibald Knox means many different things to different people. For some, especially those who have links to, or a love of, the Isle of Man, Knox is the local hero. He is the man “who could paint the wind” and captured the essence of the Isle of Man with his subtle impressionistic water colours and illuminated drawings. For others, who love all things Celtic, Knox is the man who helped re-introduce Celtic design motifs to mainstream design at the end of the 19th century, bringing Norse and Celtic influences to everyday objects. For many, including me, Knox resonates as one of the modernist designers, who can rank alongside Christopher Dresser, Charles Rennie Mackintosh and Charles Ashbee, who helped create the modernism we know today. If Dresser had a brilliant eye for geometric modernism, and Ashbee could give an everyday piece of silver soul, it was Knox who could bring together beauty and modernity. It was Knox himself who had the design and teaching mantra, “aim at order, hope for beauty”.

So when one thinks of collecting Archibald Knox you may want to start by thinking what of his many design or artistic areas you wish to focus on, which in turn may be dictated by budget.

This is perhaps what Knox is best known for and there are several important points to consider as a potential collector. Knox only designed, never made, silver for Liberty & Co and, with a very few exceptions, none of his pieces, or designs, are signed by him. So almost everything that is deemed Knox is, to varying degrees of certainty, attributions. To add to this, Knox’s designs were adapted by Liberty, so you have many pieces which may have Knox motifs, but where the entirety of the piece is not by Knox. In general, pieces which are clearly and wholly by Knox are more expensive, and within that category, those that are most radical and modernist are the most expensive.

So you might be able to start collecting Knox silver for a few hundred pounds an item – perhaps a simple napkin ring decorated with one of Knox’s enamelled Celtic motifs. For £1,000 you might similarly find a bowl or small box with a Knox motif. From several thousand and up you are probably able to acquire pieces that are entirely designed by Knox – a small vase, or good inkwell. Above £10,000 you are into some of his great pieces of the kind that appear in Museums. To date the highest price at auction paid for a Knox silver piece is around £100,000.

This is very similar an area as silver, but prices tend to be lower. From its origins in 1902 the pewter range was developed by Liberty to be a more affordable route to acquire Liberty’s metalwork designs. For under £1,000 you can get some great Knox designs in pewter. Whether to polish pewter or not is entirely personal. When sold it was shiny like silver but some collectors like a more antique patina. Just remember, that to properly polish pewter requires skilled machine polishing and it is easy to remove definition on what is a relatively soft metal.

Whether in silver or pewter I would identify Knox’s clocks as a singular area of collecting. Some of Knox’s greatest designs were clocks, and he designed about forty in total, ignoring Liberty’s variation of enamel, and size. As you might expect, silver clocks are typically rarer and more expensive than pewter ones but rarity and modernity of design really defines price which can range from a few thousand for a smaller pewter clock to over £50,000 for a grand silver one. Look out for dials that capture a Latin phrase which are especially desirable, (for example “Festine Lente”, translated as “more haste less speed”, but perhaps a Knox reference to a similar and much used gaelic phrase from the Isle of Man that means “take it easy”). Note that the carriage clock movements that Liberty’s used were often of modest quality and so I would not recommend buying a clock for its time keeping, unless you enjoy frequent and expensive trips to a clock repairer.

Knox is one of the very few designers whose jewellery designs, generally, are more affordable than his silver work. Quite why that is I am never sure, as without doubt much of Knox’s jewellery designs are breath-taking and wearable. His designs in silver, typically with enamel, range in value from £500-1500. Some of his designs were produced relatively cheaply in 9 carat gold and fetch £2,000-5,000. In my view, these are a bargain, as they are often wonderful designs. Finally his most ornate necklaces and pendants were made in 18 carat gold, to a very high standard. Expensive in their day, they are rare and can easily cost in excess of £10,000.

Knox’s art, invariably watercolours, is not uncommon. He painted avidly throughout his life. Generally he painted Manx landscapes, more rarely seascapes and boat yards, and there are some watercolours from his time painting in England. Prices vary from low thousands to over £10,000 depending on condition and subject. Anything signed by Knox is rare and will be more expensive. Provenance is of course important and for unsigned pieces, look out for de-accession labels to the reverse from Douglas Museum. The Museum inherited so many of Knox’s paintings that they sold off a large number in the 1970’s I believe, and at £10 a painting!

For the true Archibald Knox connoisseur, there is a wide range of other areas that Knox turned his hand to. Typically these items are much rarer. Knox’s first commercial designs were for textiles when he worked for the Silver Studio in around 1897. Occasionally his fabrics or wallpaper designs can be identified and come up for sale. From the Isle of Man itself, Knox did occasional furniture designs, often for himself, or other metalwork. I recently sold an amazing sundial pointer he designed that was cast on the Island in 1905. Prices in this category vary hugely but anything substantial and unequivocally by Knox from the Isle of Man itself will typically be many thousands.

What to be careful of

I would highlight two key areas. Archibald Knox suffers more than many from misattribution. Whilst Knox was the main designer for Liberty’s Cymric and Tudric range, he was by no means the only designer. There is an increasing trend to attribute everything in these ranges to Knox. In general, if an item does not have Knox’s classic Celtic entrelac or breath-taking modernism, be very sceptical, although it might still be by him, especially if an early design.

The other area to be careful of is enamels – this is of course a wider issue than for Knox. Beware “soft” (otherwise called cold) enamel restoration or outright augmentation. There is nothing wrong with restoration (augmentation is another matter) with soft enamels, but you should know what you are buying. A good UV torch will normally reveal all. Also look out for enamel onto pewter. You cannot enamel directly onto pewter, it has too low a melting point, so Liberty inserted enamelled copper roundels.

Knox’s work can regularly be found at auction and online on sites like eBay. To acquire the more expensive items you are more likely to find them at a few specialist dealers including myself.

My website hosts an article at this link that I wrote for the exhibition catalogue of Knox’s work held at Olympia in 2014 celebrating the 150th anniversary of Knox’s birth. For a much deeper view there is Dr Stephen Martin’s book “Archibald Knox”, second edition.

I am always delighted to answer questions and can be contacted via my website www.thepeartreecollection.com, my email [email protected] or by phone +447771965808.