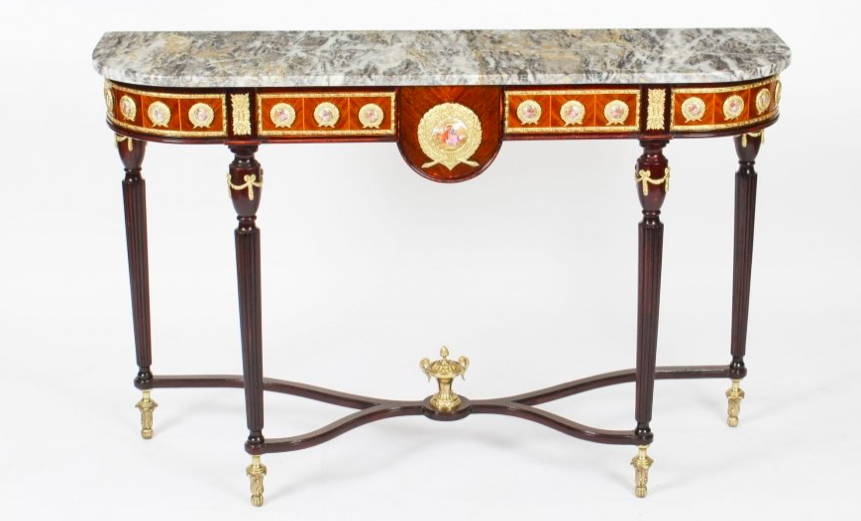 Placed against a wall, console tables are both useful and decorative in situations where space is at a premium.

Defined by their bracket construction and created to be affixed to the wall, antique console tables can be traced back to the 17th century. The luxurious tradition of Louis XIV (1638-1715) consoles of  giltwood, oak, or walnut survived during the Regence (1715-23). Principally designed as stands to support expensive and exotically-figured marble tops, they were usually serpentine-fronted and supported by tapering, double C-scroll front legs, sometimes headed by espagnolette masks and dragons, and with the X-shaped stretchers often being centred by gadrooned finials or urns.

Louis XV (1730-1750) consoles were close in form to their predecessors, although they were lighter and often with floral garlands, C-scrolls, and scallop-shells. They were invariably surmounted by mirrors.

In England, the architect Robert Adam (1728-92) revolutionised the style of console tables. During the 1780s there was a fashion for semi-elliptical tables that were painted – often in satinwood – with flowers, musical trophies and classical vignettes.

Many console tables represent arguably the purest expression of the Empire style (1800-1815). Originally inspired by the schemes of Napoleon I’s architects – Piere Fontaine (1764-1838) and Charles Percier (1764-1838) – consoles were usually rectangular in shape with overwhelming marble slap tops supported by Egyptian winged herm-caryatids, griffins, and sphinxes, which often were reflected by mirrored backs that were mounted with highly chased ormolu.

The Empire style was embraced in Britain by Thomas Hope. The mounts of Regency mahogany tables were more restrained and sparse with Grecian ornaments – wreaths, palmettes, and lion-masks – often being carved. From around 1815, console tables became increasingly elaborate in form and decoration, and from 1830 the Louis XV and Revival taste again became highly fashionable, before being superseded by an enthusiasm for the Italian Renaissance design.

The available variety of antique console tables is vast and usually, there is something available for everyone. Many console tables were made as vehicles for the expensive marble that topped them, and those that retain their original tops will command a premium. It is also worth noting that console tables are often made and sold in pairs.

Console tables range from the functional through to the highly ornate. Some are predominately display pieces, an attractive surface on which to place a vase of flowers or other decorative items. Others serve a double purpose, such as a sideboard or even as an occasional card table, side table or games table. Console tables often can also incorporate one or more drawers for storage purposes. Art Deco console tables, like most Art Deco furniture, are highly sought after and always in demand.

The fashion of re-gilding in the 18th and 19th centuries often resulted in less crisp detailing, with the carved decoration becoming obscured under layers of gilding. You may therefore encounter 18th-century console tables with as many as five layers of gilding decoration. The commercial value of an antique console table is also affected by the quality of the gilded surface.