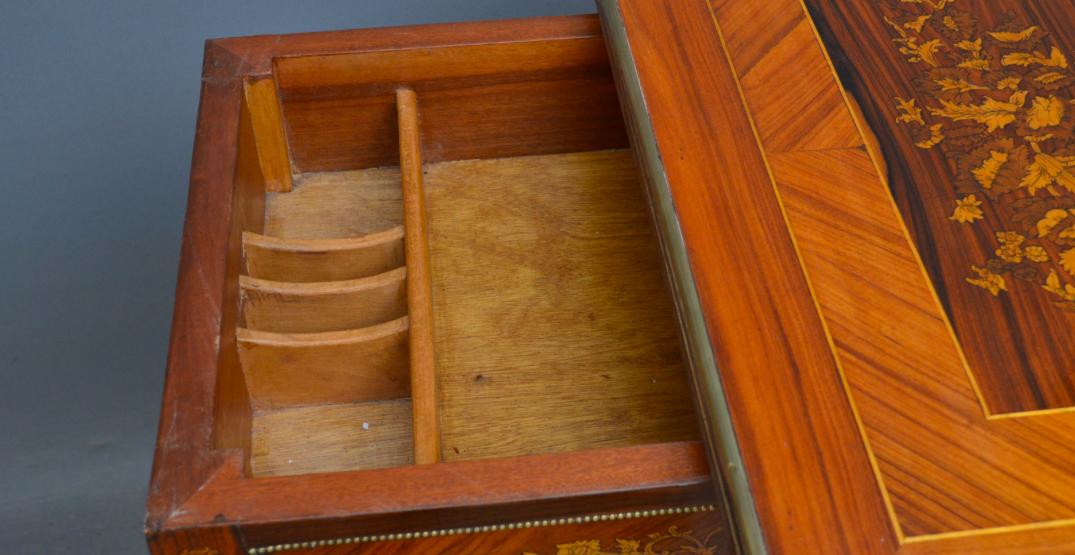 Boards for playing games such backgammon and chequers have been used since Tudor times. However, bar a few exceptions, it was only after the restoration of English monarchy in 1660, under Charles II, that tables were made specifically for games.

Most card tables were rectangular, with a flap that opened up to reveal a playing surface. On early examples, linings tend to be velvet, or of needlework. The thin green felt-like cloth that we associate with card tables, known as baize, only became popular in the early 1700s. When not in use, the flap was closed up, so that the table could be pushed against the wall. In the Neo-Classical period, semicircular card tables came into favour. The top opened to provide a circular playing area, and tables were decorated with marquetry or cross-banding. Several mechanisms were designed to support the card table flap. Special tables were made for both games and cards.

The Rise of Games & Card Tables

During the 17th and 18th centuries, games tables became increasingly popular, and increasingly intricate and elaborate, with fine inlay, marquetry and ornate detailing. Single tables sometimes allowed people to play several different games directly upon them, and many were a treasure trove of hidden drawers and flaps.

Small side tables that could be used for gaming or decorative purposes, and smaller tables generally, such as consoles, became all of the rage. However such items were really only available to a small upper class minority.

It wasn’t until the Regency period and into the Victorian era, that card and gaming tables became more popular, and readily available to a wider number of people. With the industrial revolution, and other changes in society, came the development of a far larger middle and upper middle class. Card, board and parlour games became increasingly popular, partly as the new middle classes now had parlours in which to play them, and more leisure time.

In Victorian times, a far larger number of  people enjoyed a middle class lifestyle. The parlour was for welcoming guests and for family activities. It was often the mostly finely decorated part of the house; and in early to mid Victorian times, no middle class parlour was complete without a games, card or ‘Loo’ table.  Along with  a number of other games, Loo was a popular card game even prior to the Victorian era.

A Loo table is usually round, but the main feature is that the solid surface folds down 90 degrees, so that it can be stored at the side of the room without taking up much space when not in use. In the world of antiques today, the meaning of the term ‘Loo table’, or ‘lanterloo’, has broadened, and these terms are sometimes used to describe any table that folds down in this manner. But originally and more accurately, it referred to a style of folding games table.

Parlour games of many kind were popular in Victorian homes, especially at Christmas time: blind man’s buff, twenty questions, and many more. In the early Victorian era, it was felt that children should engage in physical activity, but playing outside where they might become dirty was often frowned upon. Therefore, the parlour really was at the centre of family life.

By the end of the Victorian era games and card tables were beginning to fall out of fashion a little, becoming rather passé by the Edwardian era. That said, these beautiful, now antique, games tables have seen a revival in popularity and relevance in today’s world.

Incorporating these tables into contemporary homes

Antiques game and card tables have been making a revival in popularity for a variety of reasons. Decorative and useful, they fit well with the quirky mix and match ethos of modern interior design with antiques and are therefore more likely to be paired alongside other styles than previously. Console, or pier tables are a fabulous way to bring something old and timeless into a modern space, without taking up too much of that space, making them ideal for smaller homes. For example, a beautiful antique loo table  might make a perfect conservatory table toady. Alternatively, rather than thinking of creative ways to re-appropriate such tables, you may enjoy putting it to its traditional use, especially during the festive season. And of course, for someone who loves chess, cards, draughts or backgammon, an antique card or games table would make a very thoughtful gift.

Adapted from a piece by Stacy Cohen for Nimbus Antiques