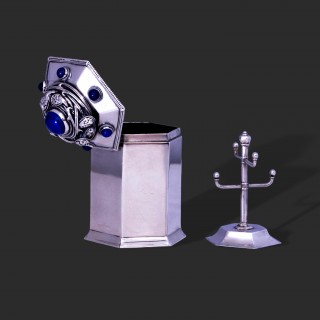 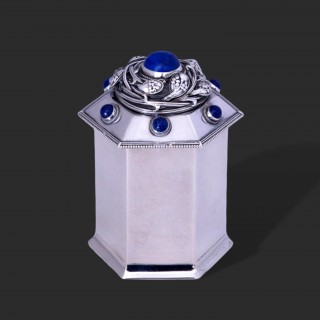 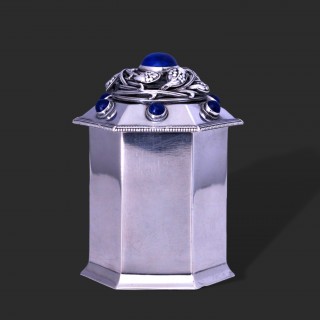 For sale is this wonderful hexagonal silver ring box set with lapis lazuli, retailed by Liberty & Co, the design attributed to Bernard Cuzner and dating to around 1905-10. The lid of the box has a rose wreath design set with a central large lapis lazuli stone surrounded by six smaller lapis stones. The box contains a ring tree, with hexagonal base, which is believed to be original to the piece.
None of the pieces are hallmarked which is highly unusual for Liberty and may reflect that this was a one off commission. Fortunately it appears in the Liberty silver sketch book page 88 model 915, annotated as a “ring box”. Image available on request. All elements of the piece have been tested and are sterling silver.
The box is a very good gauge of silver and beautifully made. The conditional is excellent and original. The box had at one time a felt or paper lining which has been removed leaving some residue of glue to the interior. A new lining could be inserted if required.
Bernard Cuzner (1877-1956) was one of Britain’s leading designer silversmiths from the first half of the 20th century. He was one of Liberty’s key designers alongside the likes of Archibald Knox and Oliver Baker in the period 1900-1906 and after the Cymric range ceased in c 1908 seems to have been Liberty’s leading (contracted) silver designer from c. 1910-1939. Cuzner was head of metalwork at the Birmingham School of Art from 1910 to 1942. His work can be seen in the Victoria and Albert Museum silver room 67, case 7.