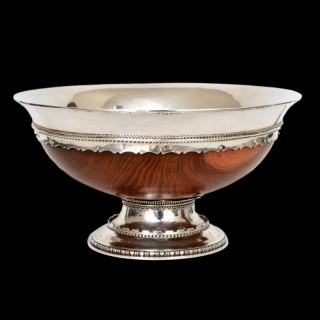 A lovely large Guild of Handicraft mazer bowl made of yew wood and sterling silver The bowl is dated London, 1955 and is so from the later Guild period when operated by the Harts. Both the silver and wood have great patina. Condition is excellent. The yew wood has some natural cracking which is original to its date of production. Full marks to lid and base.