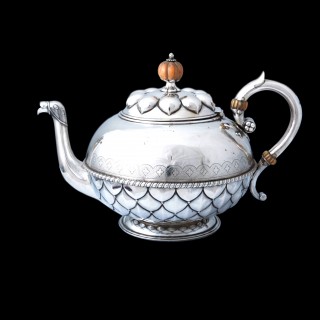 A rare gothic revival Victorian silver tea pot by the leading gothic metal working firm of John Hardman & Co. The design is by John Hardman Powell and this teapot closely resembles that exhibited by Hardman at the 1862 British Exhibition where it was acquired by the Victoria and Albert Museum, ref 8119-1863. See link for details. John Hardman Powell was the only student of Augustus Pugin, who later married Pugin’s daughter.
This teapot is dated 1876. The design brings together a number of gothic revival styles alongside a more Regency inspired pineapple style lower body. The spout is classic gothic fish/monster. The teapot is in very good condition. The finial is original but slightly worn – I believe it is made of fruit wood, but is possibly bone or ivory. The teapot has ivory or bone insulators which would not exceed the proposed governments 10% de minimus limit on antique ivory sales.