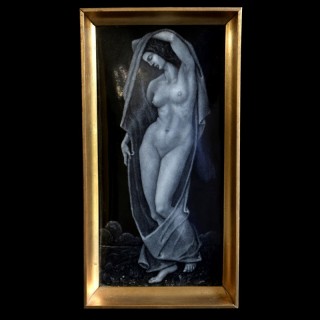 This wonderful large monochrome plaque is by Emil Meier and dates to c 1915. Emil Meier (1877-1956) was an Austro Hungarian designer, sculpture and ceramicist.
Emil Meier was born in Weckelsdorf, Bohemia, Austria-Hungary [now Teplice nad Metují, Czech Republic] on 22 November 1877. He trained as a goldsmith at the Fachschule für Edelsteinschleiferei und Goldschmeide in Turnau, Austria and attended the Kunstgewerbeschule in Vienna where he studied sculpture (1901-03). He subsequently worked as a sculptor, ceramist, metalsmith and modeller. He also taught at the Fortbildungsschule für Goldschmiede in Vienna.
In 1903 he began working with Hofsilberwarenfabrikanten Klinkosch. In 1910 he married the ceramist and sculptor Johanna Michel [also known as Johanna Meier-Michel] (1876-1930) with whom he later collaborated. In c.1910 Meier began designing a range of ceramics for the Wiener Keramische Werkstätte. He also designed for Friedrich Goldscheider and Busch & Ludescher Wiener Kunstkeramische Werkstätten. The Studio 1913, Vol 59, references enamel plaques exhibited by Meier to which this plaque may date.
Meier was a member of the Österreichischer Werkbund and the Verein Deutscher Künstler in Böhmen