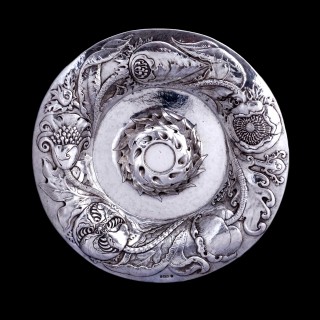 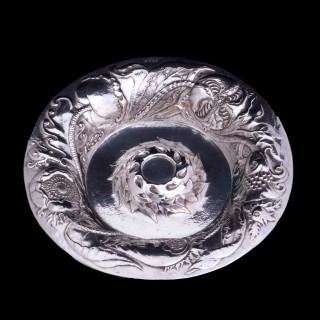 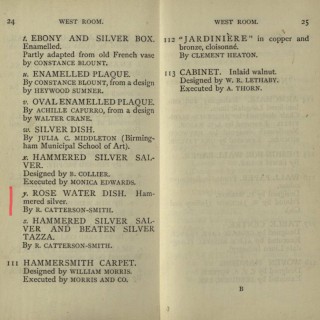 This silver dish may not be what you think it is! At 42 cm diameter and weighing nearly 1.5 kg’s, it is far greater in scale than the more typical Connell dishes of this period. The quality is enhanced by the superb condition of the dish which still shows the finer original chasing.
This dish is attributed to Robert Catterson Smith and assayed for William George Connell, London 1897. Connells were one of the earliest innovators in arts and crafts silver, being the only other exhibitor of such silver alongside Charles Ashbee’s Guild of Handicraft in the Arts and Crafts Exhibition Society of 1893.
Dishes by Connells of this type made between 1893 – 1900 are not uncommon but the size and quality of the workmanship on this dish is exceptional. It is confidently attributed to Catterson Smith, a very similar dish features in Professor Stephen Pudney’s article on Connells published in 1999 in the Silver Society journal. In the 1893 Catterson Smith exhibited a “Rose water dish: hammered silver”, and it is possible it is this one, hallmarked by Connells to be sold a few years later.
Catterson-Smith was an important figure in the arts and crafts movement. Born in Dublin. He was the son of Stephen Catterson Smith (1806-72), portrait painter and President of the Royal Hibernian Academy. Robert studied at the Royal Hibernian Academy and Dublin School of Art where he became an assistant teacher. He was a painter, black and white artist and silversmith.
Catterson-Smith moved to London in 1874 to study under John Henry Foley but this was cut short by the sculptor’s death. Robert took up painting and then turned to art metal work in 1892. Catterson-Smith was largely a self-taught silversmith though he attended some classes a Bedford Park School of Art. He worked for William Morris from 1893, particularly on the designs by Edward Burne-Jones for the Kelmscott Press edition of Chaucer. Between 1894-32 he was a member of the Art Workers Guild.
He taught design at the Central School of Arts and Crafts, London and acted as an inspector of schools for the London County Council in the late 1890s. From 1901-3 he was headmaster of the Vittoria Street Branch School and from 1903-20 of the Central School of Art, both in Birmingham. In 1912 Catterson-Smith also became Director of Art Education for the City of Birmingham. He was the author of ‘Drawing from memory and mind picturing’ (London, 1921) and was the subject of the catalogue ‘Robert Catterson-Smith: a forgotten Pre-Raphaelite’ (Brighton, 2003). He died at Park House Gardens, Twickenham, London