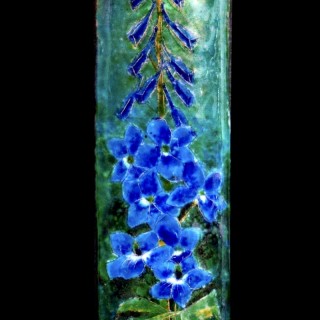 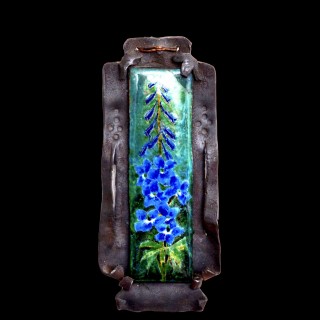 I am delighted to offer for sale this beautiful enamel plaque set in a heavy lead (possibly pewter) surround. The plaque is of blue delphinium flowers. The enamel presents beautifully though has a diagonal crack to the upper right corner, accentuated in the photo by the use of flash photography. The lead surround has some loss to the top left corner but also presents well and holds the plaque securely.

This plaque was recently acquired at Fieldings Auctioneers, Stourbridge (lot 847), who were disposing of the estate of a member of a the Headley family from Bromsgrove which included a number of enamel plaques.

Additional to the enamels in the sale were, from the same estate, pictures by Lorenzo Headley (active c 1900-1930) and metalwork by the Bromsgrove Guild of Applied Arts.   There were also two caskets set with enamels from the estate, one with an enamel monogram LH, presumably for Lorenzo Headley, and one with monogram enamel ECJ (lot 844).

I have researched this plaque, and the other enamels and metalwork, in the auction extensively.  It is tempting to assume the enamels were made by the artist Lorenzo Headley (1860-1940). Headley is an enigmatic figure who came from a large, not well off, Birmingham family engaged in a brass foundry business. This was Lorenzo’s occupation in the 1891 census but he married well, and in 1891 married Frances Helen Sheldon, only daughter of a Bromsgrove farmer. By the 1901 (and 1911) census he was listed as an artist and sculptor and there are some records of him exhibiting his art, though he was never recognised profesionally. Whilst he lived in Bromsgrove there is no record of him ever having worked for the Bromsgrove Guild (and there are extensive archives of the Bromsgrove Guild’s workers).

Whilst he might be our enameller, I believe more likely is that the enamels are by Ernest Charles Jefferies.  The signature monogram ECJ found on the casket appears on an enamel of a turkey in an important fire surround by the  Bromsgrove Guild set within Stoneleigh, a Glasgow mansion. There are four enamels featured in this surround and one of a peacock with flowers is also like that offered at Fieldings (lot 848).  There are also flower enamels inset into Bromsgrove light fittings at Stoneleigh – one of which exhibits very similar unusual leaf tendrils, similar to a loose rose enamel plaque also sold at Fieldings (lot 852). The use of heavy lead (maybe lead pewter) to frame this plaque makes no sense whatsoever but was a favoured material of the Bromsgrove Guild. (See my website for futher images).

ECJ is Ernest Charles Jefferies (1869-1942).  Jefferies was born into a local Bromsgrove family and studied at Birmingham School of Art.  From there he became a teacher at the Bromsgrove School of Art under Walter Gilbert and is listed as a metalworker and enameller for the Bromsgrove Guild of Applied Art from c 1902.  It is almost certainly his ECJ monogram on the copper casket sold at Fieldings. Jenny Townshend writes on page 18 of “The Bromsgrove Guild, An Illustrated History”:

“In  this same year [1902], the assistant headmaster of the school of art, Ernest Jeffries, began working for the Guild. The Guild bought his designs along with a muffle and a clay body for the muffle, for his use [in enamelling]. Jeffries had been a prize winning student at the Birmingham School of Art and a pupil teacher at the Bromsgrove School of Art. By 1904 he was being paid a regular wage by the Guild.”

Assuming the enamels are by Jefferies, quite how they (and his monogrammed casket) came to be part of the Headley family I am not sure. Headley is very likely to have known fellow local artist Jefferies (and the Jefferies family also ran the local grocers in Bromsgrove).  Perhaps Headley was a patron of the Guild, or perhaps there is later post war family link I have not established.