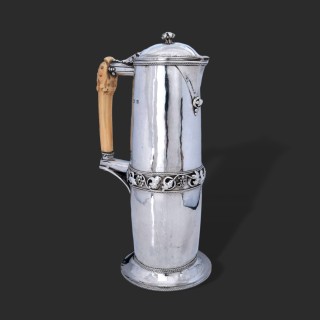 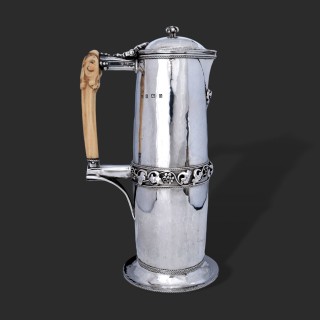 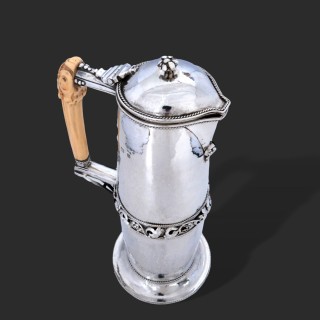 For sale is this wonderful arts and crafts flagon by William Henry Creswick. The design borrows from 16th century flagon designs and is embellished with applied vine frieze and classic arts and crafts wirework. This piece is dated 1912/3, the year Creswick entered his mark at the Birmingham assay office (10th January 1913) and it may well represent an exhibition or competition piece. The flagon epitomises all that is good about arts and crafts silver. It is not perfectly made but has a charm, style and soul that is beguiling. It is a good gauge.
William Henry Creswick (1874-1965) was son of the renowned British sculptor Benjamin Creswick. In the 1891 census at 17 William is described as an “Art Student” (almost certainly at the Birmingham School of Arts or Vittoria Street) and by the 1901 census, when he is 27, he describes himself as an “Art metal craftsman”. There is no record of his work at this time and he only enters his own assay mark on 10th January 1913, where he gives his occupation as ‘Craftsman’ of 79 Jockey Road Sutton Coldfield.
In a 1916 directory he describes himself as a “wholesale jeweller” which probably explains why his identifiable output at this time seems to have been tiny, based on the paucity of items found in auction records. His profile perhaps is in part also hidden due to his mark’s regular confusion with WH Collins (Dryad) mark. From 1921 Creswick moved to ‘Northleigh’ Colyton, Devon and from 1942 his address is given as ‘Studio Deems’, Branscombe, Beer, Devon. He registered marks from this address at the Chester assay office in 1945, describing himself as a an “Artist in gold and silver”. His later work, which seems more prevalent, is a mix of modernist and arts and crafts, typically plainer and cleaner lined but still with visible hand hammering.
William came from a family of sculptors and metalworkers and his sister in law was Nora Creswick, the Edinburgh silversmith who married his younger brother Charles, also a silversmith .
Please contact me for further details regarding the flagon’s handle.