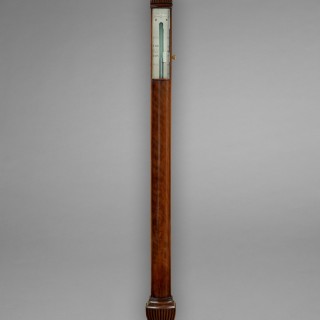 The case is in the classic Adie style with its tapering gadrooned cistern cover and finely gadrooned pediment. The elegant bow front stem is veneered in the finest flame mahogany veneers.

The piece is an early example from when Alexander Adie was joined by his son John in the business. It is signed Adie & Son, Edinburgh at the top of the silvered scale. It has a brass plate to the top right hand side to adjust the Vernier scale of the barometer.

This barometer was made by Alexander Adie who was nephew to John Miller, one of Scotland’s leading 18th century instrument makers. He was apprenticed to his uncle in 1789 and worked under their partnership name as Miller & Adie from 1804 – 1822.

In 1818 Adie had obtained a British Patent for an improved air barometer, known as a sympiesometer. For the latter he was elected a Fellow of the Royal Society of Edinburgh in 1819 and he became optician to William IV and Queen Victoria.

In 1835 Alexander Adie was joined in partnership by his son John and they signed their work Adie and Son. Two other sons, Richard and Patrick, were also instrument makers and they extended the family business to London and Liverpool. Upon his death in 1858 the following tribute was recorded by the Royal Society of Edinburgh:

“Mr Alex Adie’s … attention to business, with his skills as a mechanic, his quick inventive powers, led to his being employed by all kind of inventors, to give their schemes a practical form.”