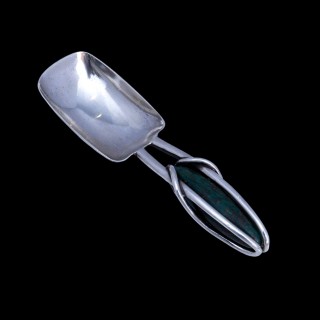 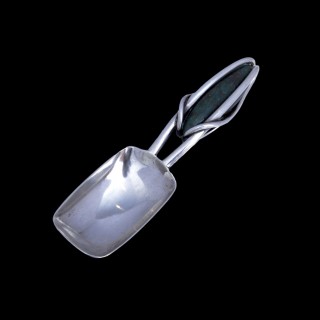 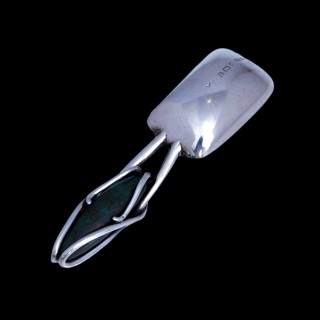 An exceptional caddy spoon by Archibald Knox. This appears in the Liberty sketch book, Westminster Archives, design number 500/83. The stone handle is made of a richly veined dark green Connemara marble or serpentine. The silver wire work is similar to that seen only rarely on other special Knox pieces (see Archibald Knox by Stephen Martin pages 179 and 180 for other examples). The spoon is wonderfully tactile and has a jewel like quality . It epitomizes Knox’s “radical modernism” as a designer that puts him in the lineage of Dresser to Hoffmann.
This spoon will appear in Stephen Martin’s forthcoming revised third edition of his book and he has said of it:
“The wirework designs of Archibald Knox are among his most modern, distinctive and innovative. Knox has elevated this humble spoon to an object of rare beauty, reminding us that even the small, in the hands of genius, may capture what is great”
This piece was exhibited 12th October to 13th January at the Manx Museum Douglas, Isle of Man, exhibition, “Archibald Knox – Artist, Designer and Teacher”.