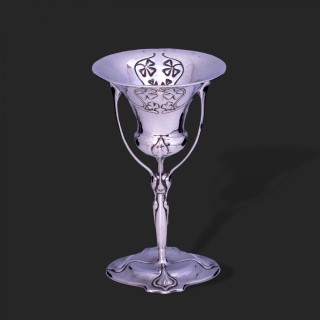 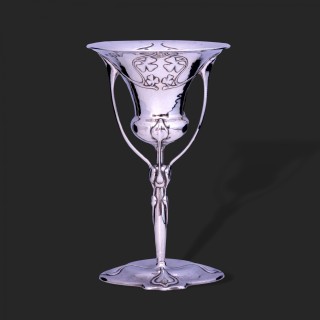 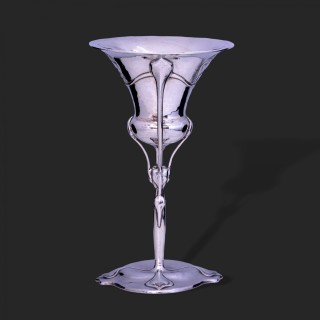 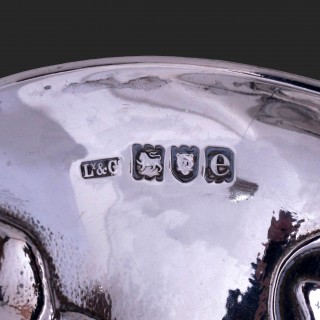 For sale is this unusual large Liberty silver cup, hallmarked for London 1900, date letter “e”. Art nouveau in style, the organic shape of the piece is augmented with a clover design to the main body of the cup. It is a good gauge and altogether a fine piece representing Liberty’s early Cymric designs.
The designer is unknown. It is almost certainly not by any of the usual candidates (Knox, Baker, Veazey, Cuzner). I think it likely that this cup was one of the unpublished entrants that received a third place “Honourable Mention” in the Studio competition to design a silver cup, the results announced in the Studio volume 57, December 1897. The design for the winning cup in that competition was acquired by Liberty as was the second placed entry by Katherine Coggin.
Condition is very good. Originally, according to the 1899 Cymric catalogue, pieces like this were not highly polished. Over the years that patina has been lost and there is some “broken fire” (different colouration in the silver) showing through the interior of the rim from years of polishing. This is of no great importance. Like many of these early Liberty pieces it is a very good gauge of silver.
This piece appears in the Liberty silver sketch book page 220. Unusually it carries no model number suggesting it is unique and may have been “bought in” by Liberty from an art school rather than through the firm of Haselers (whose model numbers are inscribed in the sketch book).