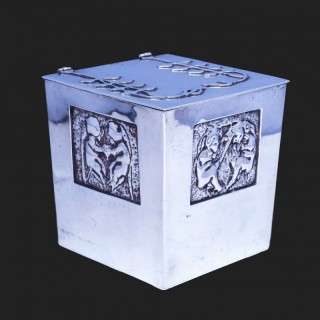 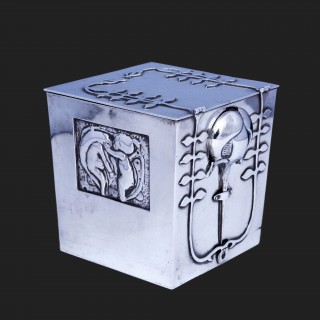 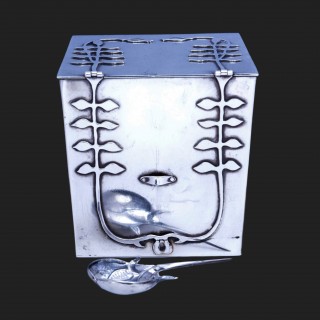 A very special and rare piece of symbolist Glasgow School silver by James Herbert McNair, with additional contribution by his wife Frances Macdonald McNair. They were both part of the Glasgow Four and friends and later brother and sister in law to Charles Rennie Mackintosh and Margaret Macdonald (Frances’ sister).
James Herbert McNair studied and worked with his close friend Charles Rennie Mackintosh at the Glasgow School of Art and Honeyman and Keppie architects around 1890-5. Both exhibited works together throughout the 1890’s culminating in their highly acclaimed and influential exhibits at the 1902 Turin Exhibition prepared with their respective wives, the Macdonald sisters. McNair’s work is extremely scarce in any medium, most being held by Liverpool and Glasgow Museums. Sterling silver pieces by any of the Glasgow Four are exceptionally rare.

The caddy is not hallmarked but was probably made around 1900. A near identical caddy, with hallmarks is known from 1897 which was a wedding gift for James’ sister and was also in the Peartree Collection as stock item A69.. This caddy is now with the Museum of New Zealand, Wellington.

This caddy’s design is full of the symbolism of marriage and love. The design consists of applied stylised plant motifs intertwining. Three of the sides hold repousse panels; one showing a seated couple holding or giving a heart to the other, one shows possibly a mother and baby, a third panel is complex in its design and may have sexual connotations. The fourth side of the caddy holds a removable caddy spoon symbolically in the form of a pomegranate.
For the Fine Art Society Exhibition in 1979 Roger Billcliffe catalogued the A69 caddy as follows: “McNair and the Macdonald sisters each designed and made one of the
three relief panels on the sides of the caddy”. To date only the panel of mother and baby is attributed to anyone other than James Herbert McNair. The design of this
panel is by Frances McNair with the signed drawing being part of Liverpool Museum’s Walker Gallery collection.
Condition is very good. There is a small split in the applied silver stem that holds the
pomegranite spoon. This caddy has provenance to Woolley Wallis auctioneers 17th June 2015, lot 335. This caddy is near identical to that hallmarked piece A69, save that is a heavier gauge of silver and fractionally larger.