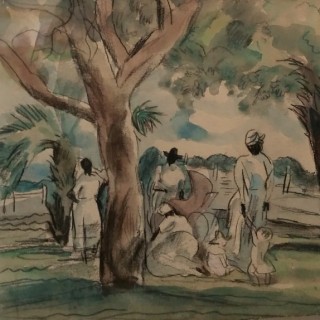 ‘Havana or’ ‘ Paysage a Havanne’

Watercolour and wash over charcoal, c.1915

Provenance: The collection of Maximillian Luce

Born Julias Pincas of Italian Serbian and Spanish Jewish parents in Bulgaria in 1885, Pascin was educated in Vienna before he moved to Munich, where he attended art school in 1903.

From 1904, his drawings were regularly published in satirical journals.

In 1905 he changed his name to Pascin at the request of his parents, who were unhappy about the family name being brought into disrepute, This was due to his appetite for drinking and debauchery. That same year he moved to Paris, where he continued to produce satiric drawings. He was embraced by members of the Parisian art world.

To avoid service in the Bulgarian army, at the outbreak of WW1 Pascin traveled for a time in the USA, spending most of his time in and around New Orleans and also visiting Cuba. He became a U.S. citizen in 1920 and returned to Paris later that year. Though he would spend most of the rest of his life in Paris. In 1918 he married Hermine David, a talented painter herself. In Paris they rented a studio in Montmartre, center of Bohemian Paris where he struck up friendships with Chagall, Soutine, Modigliani and Foujita. His models were the local dancer girls and prostitutes and his paintings soon made him a leader of the École de Paris. In the 1920s he painted the works for which he is best known, the delicately toned and thinly painted, studies of women, usually prostitutes.

He was at last financially successful, but he continued to lead a life of and excess and spent money as soon at it arrived. He was famous for his extravagant parties and all day picnics. He struggled with depression and alcoholism and on the eve of an important one-man show of his work, Pascin hanged himself. Several of the galleries in Paris closed on the day of his funeral as a sign of respect.