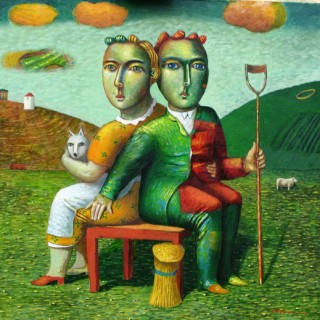 Portal Painters has been exhibiting finely detailed figurative paintings by a unique group of artists for over fifty years. The paintings are sometimes humorous, often surreal but always beautifully executed. Throughout its existence Portal Painters has kept itself slightly apart from the fads and fashions of the art world. Our artists combine technical skill with great imagination and – although of course each painter has their own unique style – under the Portal banner they come together to form a coherent ‘school’ of painting.

Portal Painters exhibits the work of some twenty artists, adding new ones from time to time. With the exception of Isabelle Rozot, who is from Paris, they are UK based. Several of them are Scottish: John Byrne, James McNaught, Whyn Lewis and Heather Nevay all studied at Glasgow School of Art, which has produced so many of Scotland’s finest painters.

Beryl Cook (1926 – 2008) is one of our most celebrated artists. A former seaside landlady, she started painting in her forties and exhibited for her entire career with Portal, which mounted a total of eighteen exhibitions. Her colourful and gently humorous world of large ladies, male strippers and people generally enjoying themselves in bars and night clubs has changed the way we see things.

After studying for an Art History degree at East Anglia University and a year spent working at the Galerie de Seine in Paris. Jess Wilder ran the gallery for many years. She runs it now as Portal Painters exhibiting at major London Art Fairs: The London Art Fair at The Business Design Centre in Islington in January, The Affordable Art Fair in Battersea in March and in Hampstead in June, and The 20/21 British Art Fair at The Royal College of Art in September. Jess also uses a broad knowledge of her work to appraise and sell Beryl Cook’s paintings

Portal Painters started life as Portal Gallery in 1959 in Mayfair’s Grafton Street. Its founders Eric Lister (1926 – 1988) and Lionel Levy always championed the figurative and the quirky in painting and the gallery became well known for exhibiting the work of self-taught (sometimes known as naïve) painters of whom James Lloyd was probably the best known. Over the years the gallery’s unpretentious attitude and its very special group of painters have made Portal internationally famous. Many people buy their first painting from us and are reassured by the welcoming atmosphere, modest prices and fascinating diversity of work we offer. We aim to show that contemporary painting can be accessible, enjoyable and of outstanding quality.